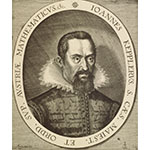 Born in Weil der Stadt, near Stuttgart. Studied in Adelberg and Maulbronn before enrolling in 1584 at the University of Tübingen, where he was taught by the Copernican Michael Maestlin (1550-1631). In 1594, began teaching in Graz. His almost mystical search for the geometrical necessity of the Copernican system led him to describe in Mysterium cosmographicum (Tübingen, 1596) a cosmological structure in which the planetary spheres were inscribed and circumscribed in the five regular polyhedra. Kepler's mathematical skills attracted the attention of Tycho Brahe (1546-1601). The two first met in 1599. Forced to leave Graz for religious reasons, Kepler joined Brahe in Prague in 1600 to help him define his geo-heliocentric system. In 1601, at Brahe's death, Kepler succeeded him as mathematician to Emperor Rudolf II (1552-1612). With the function, he inherited the astronomical data compiled by Brahe in more than twenty years of observations. A decade's study of data on Mars enabled Kepler to discover that the planetary orbits were elliptical and were traveled by the planets at constant areal velocities. Kepler announced these two findings - his first two laws - in Astronomia nova (Prague, 1609). In 1610, he published Dissertatio cum Nuncio sidereo (Prague), in which he applauded the astronomical discoveries of Galileo Galilei (1564-1642). In Dioptricae (Augsburg, 1611), he discussed the optics of convex and concave lenses. This led him to design an astronomical telescope composed of two convex lenses - a different combination from the Galilean system. In 1612, after the expulsion of the Lutherans from Prague, Kepler moved to Linz. There, in 1619, he published Harmonice mundi, in which, linking each planet with specific musical intervals, he described his conception of celestial harmony. In the work, Kepler also formulated his third law on the relationship between the semidiameters of the planets' orbits and their revolution periods. He discussed his astronomical ideas at greater length in Epitome astronomiae copernicanae (Linz, 1621). Inspired by William Gilbert's (1540-1603) De magnete (London, 1600), Kepler introduced magnetic forces between the planets and the Sun to explain both the elliptical shape of the orbits and the planets' travel along them. In 1627, printed the Tabulae Rudolphinae in Ulm. Dedicated to Rudolf II, they applied Kepler's three laws to the practical prediction of planetary motions.