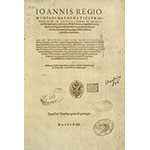 Johann Müller (Regiomontanus) was born in Königsberg (in Latin, Regiomonte). In 1450, enrolled at the University of Vienna, where he studied astronomy with Georg Peurbach (1423-1461), becoming his colleague in 1457. After Peurbach's death, Regiomontanus went on the mission to Italy that Peurbach had planned with Cardinal Bessarione (1403-1472) to search for ancient Greek astronomical manuscripts. In Rome, completed Peurbach's unfinished Epytoma in Almagestum Ptolemei in 1462. The work, printed in Venice but not until 1496, was a simplified account of the Almagest, which it challenged on some points. For example, it contains the first European criticism of Claudius Ptolemy's (2nd C. C.E.) lunar model, which predicted an apparent diameter of the Moon in the first quarter that was double the diameter actually observed. In 1464, while still in Italy, Regiomontanus completed De triangulis omnimodis, printed in Nuremberg only in 1533. The work formulated the sine theorem - already developed by Nasîr al-Dîn al-Tûsî (1201-1274) and Levi ben Gerson (1288-1344) - which made it possible to streamline calculations. During a stay in Hungary, Regiomontanus continued to simplify the mathematical system used in astronomy by compiling a series of tables. These included the Tabulae directionum, prepared in 1467 and printed in Augsburg in 1490. Settled in 1471 in Nuremberg, where he founded a printing press for publishing scientific works and built an observatory. With the help of his patron and disciple Bernard Walther (1430-1504), studied the Sun's annual path across the zodiac and other astronomical phenomena. Eventually challenged the Aristotelian view of comets as atmospheric phenomena. Published the Ephemerides in Nuremberg in 1474. The first printed work of its kind, it gave the daily positions of the celestial bodies from 1475 to 1506. The book was so successful that it was used by Christopher Columbus (1451-1506) and Amerigo Vespucci (1451-1516). Thanks to his new-found fame, Regiomontanus was summoned in 1475 by Sixtus IV (1414-1484, Pope from 1471) to reform the Julian calendar; but, having reached Rome, he died before he could start the task.