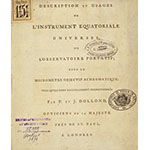 Optician and maker of scientific instruments that provided him with a prosperous business, Dollond was also an excellent theoretical specialist; he gave an impressive paper on light refraction at the Royal Society of London in 1758, which was later published. Dollond invented the achromatic telescope and many improvements to telescope and microscope lenses. His technical and theoretical skills received an initial recognition in 1761, a few months before his death, when he was elected Fellow of the Royal Society. Also won the Copley Medal, the highest scientific award of his time: the prize was established in 1736 by the Royal Society, thanks to a bequest from Sir Godfrey Copley. Dolland's firm remained in business under his elder son Peter (1730-1820), joined, in 1766, by his younger son, John.