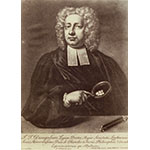 Born in France into a Huguenot family, fled the country and settled in England in 1694, after the Revocation of the Edict of Nantes. Studied at Oxford, where he obtained a Bachelor of Arts degree in 1705. Replaced John Keill (1671-1721) as lecturer in experimental philosophy at Hart Hall, continuing his predecessor's work. Closely involved in setting up experiments at the Royal Society of London. His reputation as able experimenter was enhanced by the publication of A course of Experimental Philosophy. Both volumes were published in London, the first in 1734, the second in 1744, the year of his death. A staunch defender of the ideas of Isaac Newton (1642-1727), Desaguliers was one of their most active popularizers - notably through several treatises on experimental physics and a series of highly successful public lectures and demonstrations in Holland and England.