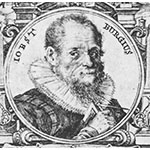 Born in Switzerland, Bürgi acquired considerable skills in mathematics and astronomical observations and computations. In 1579, he became clockmaker and instrument-maker at the Kassel observatory, the first to be fitted with a revolving dome. His early reputation as instrument-maker prompted an invitation to Prague from the scientists of the imperial court. He accepted in c. 1603, becoming clockmaker to Rudolf II (1552-1612). In Prague, he helped Johannes Kepler (1571-1630) perform calculations on the astronomical data bequeathed by Tycho Brahe (1546-1601). Bürgi built astronomical instruments distinguished for their precision and beauty. He also crafted one of the first four-tip proportional compasses and an unusual "theodolite" for perspective drawing, with a treatise on its use, now lost. Some of his inventions were reworked and published in the writings of his brother-in-law Benjamin Bramer (1588-1652). His most important mathematical contribution was a set of log tables, which he composed before the end of the sixteenth century but did not publish until 1620.