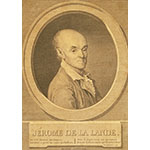 Studied at the Jesuit college of Lyon. On his arrival in Paris to study law, met the astronomer Joseph-Nicolas Delisle (1688-1768), soon becoming his student and assistant. Also attended lectures by Pierre-Charles Le Monnier (1715-1799). In 1751, went to Berlin at Le Monnier's request. The journey was linked to Nicolas-Louis de Lacaille's (1736-1813) expedition to the Cape of Good Hope, begun the previous year. At the same time as Lacaille in the opposite hemisphere, Lalande measured the position of the Moon to determine its parallax and thus its distance. On his return to Paris in 1753, was elected to the Académie Royale des Sciences. Together with Alexis-Claude Clairaut (1717-1765), applied numerical methods for solving the "three-bodies problem" to the correct determination of the return of the periodic comet identified by Edmond Halley (1656-1742). These methods made it possible to factor in the disturbances caused by Jupiter and Saturn to the comet's orbit. In 1760, Lalande succeeded Giovanni Domenico Maraldi (1709-1788) as editor of the astronomical almanach Connaissance des temps and Delisle as professor of astronomy at the Collège Royal. Became director of the Paris Observatory in 1768. The following year, coordinated an international initiative to follow the passage of Venus on the Sun's disk. By determining the parallax of the planet, a more exact estimate of the Earth-Sun distance would be obtained. In addition to the often-reprinted Astronomie (Paris, 1764), Lalande's huge output includes successful works of popular astronomy.