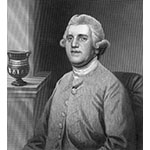 The last child of a family involved in pottery since the seventeenth century, Josiah Wedgwood initially worked in the paternal firm, acquiring great skill at the potter's wheel. Complications due to a bout of smallpox led to the amputation of a leg, making him unable to continue working in the factory. When his brother refused to make him a partner, he formed a productive association with Thomas Whieldon, the best-known potter of his time. Wedgwood acquired such technical skill in pottery that he was able to start his own company in 1759. Under the name Etruria, it would become one of the leading pottery firms in Europe. With his business sense and a gift for organization, he applied the latest chemical advances to earthenware manufacturing. He created new materials and compounds, such as "Wedgwood ware" (or "English faience"), Jasperware, and "Black Basalt," decorated with neoclassical motifs. These products became hugely popular with European royal families, posing a serious threat to the porcelain giants such as Sèvres and Meissen, which eventually imitated their new rival. Thanks to his invention of the pyrometer, Wedgwood was elected to the Royal Society, where he became friendly with the foremost scientists of his age. Erasmus Darwin convinced him to invest in the steam engine, and his Etruria was the first factory to install it. Josiah Wedgwood's daughter married the son of Erasmus Darwin: their offspring included Charles Darwin.