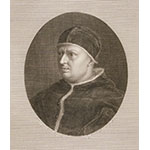 Giovanni de' Medici, second son of Lorenzo the Magnificent (1449-1492) was elected Pope - in a very brief conclave - in 1513. Under the name Leo X, he succeeded Julius II (1443-1513, Pope from 1503), a member of the powerful Della Rovere family. Leo X strove unsuccessfully to keep the Italian peninsula from falling entirely under French and Spanish rule. He aimed to make Rome the cultural center of Christianity, reforming the University and promoting the methodical collection of documents and evidence from the classical world. He patronized some of the greatest artists and men of letters of his time. His pontificate coincided with the beginning of the Protestant Reformation in Germany, of which he did not fully appreciate the extent or the consequences. On June 15, 1520, in the bull Exsurge Domine et iudica, Leo X condemned 41 of Martin Luther's (1483-1546) famous 95 theses of 1517.