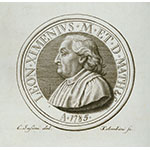 The Jesuit Leonardo Ximenes was one of the major scientific personalities of eighteenth-century Tuscany under the Lorraines. He wrote books on astronomy, hydraulics, geometry, physics, and mechanics. In 1755, he restored the gnomon of Santa Maria del Fiore, with which he made many observations. In 1756, he founded an astronomical observatory in Florence in the convent of San Giovannino. In 1761, he became geographer and mathematician to the Grand Duke. An accomplished "hydraulic engineer," he supervised the drainage of two marshlands: the Tuscan Maremma and the Padule around Bientina. He directed the construction of the Strada Regia Pistoiese [Royal Pistoia Road] and designed the bridges on the Lima and Sestaione torrents.