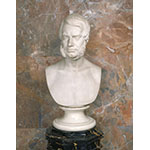 Second son of Grand Duke Ferdinand III (1769-1824). Accompanied his father to Germany when Tuscany was occupied by the French. Returned to Florence in 1814. In 1824, succeeded his father, carrying on his policy and launching large-scale public works. In 1828, promoted the drainage of the Maremma, expanded the Tuscan road network, supported the construction of railroads, and sought to revive the iron and steel industry and manufacturing. Encouraged Italian scientists to hold their Congresses in Pisa (1839) and Florence (1841); inaugurated the Tribuna di Galileo and commissioned an edition of Galileo's works. His liberal policy led him to reform the law on freedom of the press and grant a Constitution in 1847. But he reversed course abruptly in response to the revolutionary movements that swept Italy in 1848. In 1849, Leopold II abolished the Constitution and subserviently followed the policy of Vienna. In 1852, he even restored the death penalty for acts of violence against the government and religion. In 1859, at the outbreak of the Second War of Independence, a peaceful "revolution" forced him to abdicate and go into exile in Austria. Died in Rome, where he had been staying since 1869.