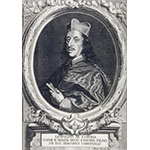 As a patron of scientists, science enthusiast, and promoter of Galileo's heritage, Leopold, with his brother Ferdinand II (1610-1670), inspired and directed the experimentation program of the Accademia del Cimento (1657-1667). He also used the Accademia as an effective "public relations" tool, both to "delight" illustrious guests at court and to establish formal contacts with its foreign counterparts, for example in Paris and London. The Prince was particularly interested in astronomy and corresponded regularly with Europe's greatest thinkers. In 1667, the year of the Accademia del Cimento's closure, he was appointed Cardinal. His personal effects included, among other treasures, Galileo's lens and telescopes, the Jovilabe, and the Cimento glassware. At Leopold's death in 1675, these objects were added to the Medici collections.