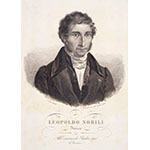 After studying at the Military Academy of Modena and taking part in Napoleon's campaign in Russia, Nobili dedicated himself entirely to the study of physics, in particular electrical phenomena. Designed the astatic galvanometer and some of the earliest induction apparatuses. Worked on thermoelectricity with Macedonio Melloni (1798-1854) and on electrophysiology. Called to Florence by Leopold II (1797-1870), Grand Duke of Tuscany. Taught at the Museo di Fisica e Storia Naturale. Because of his researches, he is regarded as one of the Italian pioneers in the field of electromagnetism.