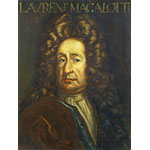 Born into a noble Florentine family, Magalotti studied at the University of Pisa, where he was taught by such well-known figures as Marcello Malpighi (1628-1694) and Giovanni Alfonso Borelli (1608-1679). In Florence Vincenzo Viviani (1622-1703) became his friend and mentor. In 1660, the still-young Magalotti was appointed Secretary of the Accademia del Cimento. He prepared the Saggi di naturali esperienze [Examples of natural experiments] (Florence, 1667), which contained a methodical account of the academicians' most notable experiments. He traveled extensively, first privately, then as a diplomat for Grand Duke Ferdinand II (1610-1670) and later for Grand Duke Cosimo III (1642-1723). In 1678, a sudden break in his relations with Cosimo III interrupted his dazzling scholarly career and journeys. Magalotti retired for a decade from public life, dedicating himself to the writing of Lettere familiari, published posthumously in Venice in 1719. In 1689, he returned to public life - as "third counselor of State" - and a prolific writing career: during these years he began his Lettere su le terre odorose d'Europa e d'America dette volgarmente buccheri. First a Galilean, then a free-thinker and friend of Saint-Évremond, and finally a follower of Pierre Gassendi's (1692-1655) corpuscularian philosophy, Magalotti experienced the contrast between the new science and religious orthodoxy to the full. He espoused ascetic practices that, for a while, led him to take the habit of the congregation of San Filippo Neri. The tension between new science and religious orthodoxy informs his anti-atheist Lettere familiari.