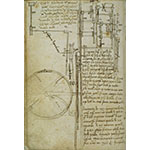 An architect, goldsmith, mathematician, and - above all - clockmaker, Lorenzo founded a Florentine dynasty of clockmakers and scientific-instrument makers that notably included his sons Camillo (1484-1560), Benvenuto (1486-1532), and Eufrosino (late 15th C. - 16th C.), as well as his nephew Girolamo (c. 1530-1614). He also participated in the competition for the façade of Santa Maria del Fiore. As clockmaker, he gained fame and honor with the construction of the Orologio dei Pianeti [Planetary Clock]. Initially commissioned by Lorenzo the Magnificent (1449-1492) as a gift to Mattia Corvino (1440-1490), the instrument was later donated to the Signoria to be placed in the Sala dell'Orologio (today Sala dei Gigli) in the Palazzo Vecchio. The clock was restored in 1560 by Lorenzo's nephew Girolamo. He was certainly in contact with Leonardo da Vinci (1452-1519), who is quoted in Benvenuto's manuscript notebook, preserved in the Biblioteca Marciana in Venice. Lorenzo took part in the discussions on the placement of Michelangelo's David: like Giuliano da Sangallo (1443-1516), he argued in favor of installing the statue in the Loggia dei Signori. His workshop in Via degli Albertinelli (later Via dell'Oriuolo) passed on to his sons, who kept it in operation for the entire sixteenth century.