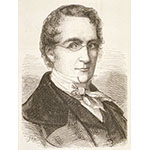 French chemist and physicist. After attending an obscure secondary school, he enrolled in the École Polytechnique in Paris 1797. A graduate of the École Nationale des Ponts et Chaussées, he served as assistant to the chemist Claude-Louis Berthollet, who set him on a teaching career. Gay-Lussac became professor of practical chemistry, then chemistry, at the École Polytechnique. He was concurrently appointed to a chair in physics at the Paris Faculty of Science. Lastly, in 1832, he was elected to the chair of General Chemistry at the Muséum National d'Histoire Naturelle, a position that he held until 1848. His many fields of investigation included magnetism, fermentation phenomena, nascent organic chemistry, and Voltaic electricity applied to chemistry. However, he focused most of his attention on the chemistry and physics of gases. His study culminated in the formulation of the well-known laws bearing his name, which describe the relationship between pressure, temperature, and volume in gaseous substances.