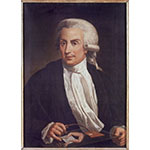 Doctor and physicist from Bologna. Obtained a doctorate in medicine and surgery in 1759. Appointed professor of anatomy in 1766. Elected to the Accademia delle Scienze of Bologna in 1765, and became its president in 1772. In a series of celebrated experiments, Galvani observed that frog's legs recently removed from the animal not only contracted in response to lightning discharges or sparks from an electrostatic machine, but reacted when touched with a metal arc or one of a number of metal conductors. As a physician and anatomist, Galvani was convinced that the phenomena were caused by a type of electricity specific to living beings, called animal electricity. According to Galvani, the contact between the frog's legs and metals enabled animal electricity to flow and to set off muscular contractions. In De viribus electricitatis in motu musculari commentarius (Bologna, 1791), he set forth his theory of animal electricity, which triggered a sharp debate with Alessandro Volta (1745-1827) and stimulated the research leading to the invention of the electric battery. While Volta's theories prevailed over Galvani's (which continued to be strenuously defended by his disciples), Galvani unquestionably deserves the credit for pioneering the crucial research in electrophysiology that flourished in the nineteenth century.