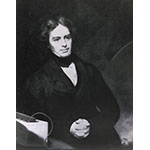 One the major English physicists and chemists of the nineteenth century. He began his career as a book-binder, but became an assistant to Humphrey Davy (1778-1829) and one of the best experimenters of his time. His researches in the field of electricity were fundamental. He discovered electromagnetic induction, introduced the concept of lines of force, studied the magnetic properties of many bodies, and was the first to produce an electric current from the motion of a conductor in a magnetic field. He also made important observations in chemistry, electrochemistry, and optics. He studied the mechanisms of electrolysis, improved optical glasses, and discovered the magnetic-optical effect that bears his name.