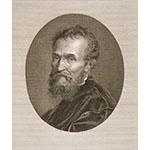 Painter, sculptor, architect, and poet, Michelangelo spent most of his youth in Florence, producing works such as the Battle of the Centaurs, the Madonna of Bruges, the Tondo Doni, the Tondo Pitti, the David, and the Battle of Cascina. During his first stay in Rome (1496-1501), he produced the Bacchus and the Pietà in Saint Peter's. In 1506, was called to Rome by Julius II (1443-1513, Pope from 1503) to prepare the Pope's funeral monument. The sculptural program for the tomb of Julius II, on which Michelangelo spent nearly forty years, produced the Moses, the Prisons in the Boboli Garden, the Slaves, now in the Louvre, and the Victory in the Palazzo Vecchio. In 1508, with the mausoleum work suspended, Michelangelo was commissioned to paint the frescoes on the ceiling of the Sixtine Chapel. In 1518, he returned to Florence to complete the San Lorenzo complex: he designed the façade of the Basilica, the Sacrestia Nuova, and the Biblioteca Laurenziana. At the same time, he worked on the town's fortifications for the republican government, which had replaced the Medici seigniory. In 1534, moved back definitively to Rome, where he produced the Last Judgment, the Pauline Chapel, and the Pietà Rondanini. In these years, he was chiefly engaged in architectural projects, including the Campidoglio and the construction of Saint Peter's with its massive double-shelled dome, the completion of the Palazzo Farnese, and the plans for San Giovanni dei Fiorentini, Santa Maria degli Angeli, and Porta Pia. Michelangelo showed an abiding interest in applied mathematics and scientific topics.