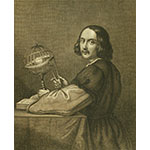 Born in Torún (Pomerania), Copernicus (Niklas Koppernigk) was guided toward ecclesiastical studies by his uncle Lucas Watzenrode, a bishop. In 1491, he entered the University of Krakow and in 1495 he became canon of the Chapter of Frombork Cathedral. In 1496, he enrolled as a law student at the University of Bologna, where he met Domenico Maria Novara (1454-1504) and became acquainted with his peculiar ideas about the Earth's motion. In 1501, he switched to the study of medicine at the University of Padua and in 1503 he gained a doctorate in canon law at the University of Ferrara. Settled in Frombork, he began his scientific work in 1510 in his spare time from various administrative and medical duties. In about 1514, he circulated a few manuscript copies of his Commentariolus, a short treatise in which he rehearsed the heliocentric hypothesis of Aristarchus of Samos (3rd C. B.C.E.): all the planets and the Earth revolve around the Sun, immobile at the center of the Universe. In his treatise, Copernicus provided the first geometrical support for the hypothesis. In 1515, he informed Rome of his belief in the need to reform the Julian calendar. In the public-administration sphere, he wrote De monetae cudendae ratione in 1517. In it he outlined what later became known as "Gresham's law," i.e., bad money, with low gold content, chases out good money, with high gold content, causing prices to rise. In 1539, Copernicus hosted Georg Joachim Rheticus (1516-1576), who wanted to study the heliocentric system. Rheticus divulged the framework of Copernican theory in Narratio prima de libris revolutionum, published anonymously in Danzig in 1540; he urged the "master" to print the major astronomical work that he had been preparing for years. Meanwhile, Rheticus supervised the publication of De lateribus (1542), the part of Copernicus's magnum opus dedicated to spherical trigonometry. In 1543, Rheticus finally took on the task of managing the printing of the entire work with Hans Perlein (Johannes Petreius, 1497-1550) in Nuremburg. But Rheticus was unable to complete the task. The editorship of De revolutionibus orbium coelestium passed to the Lutheran theologian Andreas Osiander (1498-1552). Osiander toned down the religious implications of the work, which ran counter to the astronomical concepts of Holy Scripture, and wrote a preface to De revolutionibus that presented the heliocentric hypothesis as a mere mathematical artifice for the sole purpose of computing the motions of the celestial bodies with greater precision. Copernicus could not intervene against this misrepresentation of his views. Legend has it that in 1543 he received a copy of De revolutionibus on his deathbed.