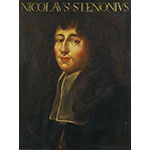 The Dane Nicolas Steno (in Danish: Niels Steensen) studied medicine in Copenhagen, Amsterdam, and Leiden. After a year in Paris, Steno divided his time between Tuscany and Denmark. During his first stay in Tuscany (1666-1667), he performed major anatomical dissections and published his fundamental work on the structure of muscles - Elementorum myologiae specimen, seu Musculi descriptio geometrica (1667) - to which he appended his famous memoir on the dissection of a shark's head. In addition to describing muscle structure, Steno explored the glandular and lymphatic systems and the anatomy of the brain. He discovered the excretory duct of the parotid gland, which he described in Observationes anatomicae (Leiden, 1662). In 1669, while still in Florence, he published De solido intra solidum naturaliter contento dissertationis prodromus, regarded ever since as a landmark work in the history of geology. Steno recognized the organic origin of fossils and sketched a theory of geological strata, which he used in an attempt to reconstruct Tuscany's geological development. In 1675, eight years after converting from Lutheranism to Catholicism, he was ordained priest. In his final years, he dedicated most of his energies to religion, almost completely abandoning his scientific studies.