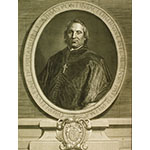 A French mathematician from Briançon, Finé (known as Fineo) studied the humanities and mathematics in Paris at the Collège de Navarre. He opposed the concordat that François I de Valois (1494-1547), King of France, sent to the universities in 1517. Finé was imprisoned for this until 1524, but was later appointed by the same sovereign to the chair in mathematics at the Collège Royal (1532). In 1531 Finé had presented François I with a Epistola in rima ... sulla dignità, perfezione e utilità delle matematiche (Rhyming epistle ... on the dignity, perfection, and utility of mathematics), and had already achieved distinction as the editor of the works of Georg von Peurbach (1423-1461) and Gregor Reich. He was a prolific inventor and maker of mathematical instruments and sundials, described in innovative treatises such as Quadrans Astrolabicus (Paris, 1527) and De Solaribus Horologijs et Quadrantibus (Paris, 1531). His European fame was attested by the many publications and translations of his works on astronomy, geography, cartography, gnomonics, practical geometry, and scientific instruments.