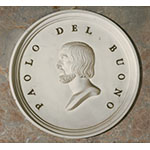 A Florentine disciple of Famiano Michelini (1604-1665), Paolo Del Buono received his doctorate from the University of Pisa in 1649. In 1655, he went to Germany to enter the service of Ferdinand III (Emperor from 1637 to 1657) and was appointed director of the Imperial Mint. During his stay, with his student Geminiano Montanari (1633-1687), he visited the imperial mines in the Carpathian mountains and invented a method of extracting water. Del Buono performed wide-ranging research in physics and experimental science. Paolo and his brother Candido (1618-1676) both belonged to the Accademia del Cimento, with whom Paolo corresponded from Germany.