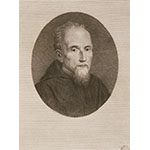 Entered the Servite order in 1565 and assumed the name of Fra' Paolo. In 1579, Sarpi obtained a degree from the University of Padua and then lived mainly in Venice, with frequent visits to Rome on business for the Order. Sarpi maintained a voluminous correspondence with foreigners, many of them Protestants. He consistently tried to keep abreast of developments in all fields, including the sciences. He discovered and partly explained the venal valves, of critical importance for the subsequent discovery of the circulation of the blood. He was the first in Italy to learn of the discovery of the telescope. Sarpi kept a notebook of scientific and philosophic speculations, many of which concerned motion. After his encounter with Galileo (1564-1642) - probably in late 1592 - he participated in the latter's scientific investigations until 1606. That year, he became embroiled as the main figure in the so-called War of the Interdict, which led the ecclesiastical authorities to deprive the Republic of Venice of the sacraments and holy offices. Sarpi was a key intermediary in the contacts established by Galileo with the Venetian government in 1609 regarding the telescope.