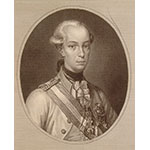 Grand Duke of Tuscany from 1765 to 1790, Peter Leopold carried out many major political, economic and administrative reforms. He began the drainage of the marshlands of the Maremma near Siena and the Valdichiana. He overhauled the justice system, introducing significant innovations in ecclesiastical legislation as well. He ordered the drawing of maps and borders, and founded schools and institutions. In 1775, he founded the Museo di Fisica e Storia Naturale of Florence, appointing Felice Fontana (1730-1805) as its first director. Peter Leopold commissioned the purchase and construction of apparatus to perform mechanical, pneumatic, and electrostatic experiments. He launched the construction of the astronomical observatory ("La Specola") attached to the Museum. He arranged for a chemical laboratory to be set up in the Museum itself: from this facility, an extraordinary "chemical cabinet" used personally by the Grand Duke survives. Elected Emperor in 1790, he signed peace treaties with Prussia and Turkey. He joined other European powers in calling for an intervention to rescue the French monarchy - Queen Marie-Antoinette of France was his sister - from the revolutionary threat.