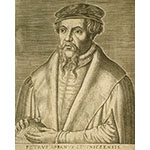 Born in Leisnig, Saxony. Entered Leipzig University in 1516 and Latinized his surname Bienewitz ("of the bees") into Apianus. At the University of Vienna, he studied with the mathematician, astronomer, and astrologer Georg Tanstetter (known as Collimitius, 1481-1530) until 1523. In 1520, he began to publish a series of works that renewed cartography thanks to efficient surveying methods. In the Cosmographicus liber (Landshut, 1524) Apianus used the cross-staff to measure lunar distances. Amerigo Vespucci (1451-1516) and Johann Werner (1468-1528) had relied on the same instrument to determine the longitude of a locality. In an addendum to his book, Apianus introduced several instruments for finding the time at night, including the "lunar compass" and the "nocturnal." In 1527, he was appointed professor at the University of Ingolstadt. He soon achieved fame as astronomer and astrologer. After careful observations of the comet of 1531, Apianus published the Practica (Landshut, 1532), in which he announced the major discovery that a comet's tail is always pointed away from the Sun. He wrote several works on instruments for calculation and astronomical observation. He perfected the torquetum, a useful device for measuring the ecliptic, equatorial, and altazimuth coordinates of a celestial body. In Instrumentum primi mobilis (Nuremberg, 1534), on trigonometric calculus, he described a system for finding the sines of angles. In 1536, he published a famous map of the 48 Ptolemaic constellations. But his masterpiece is Astronomicum Caesareum (Ingolstadt, 1540), dedicated to Emperor Charles V (1500-1558). The work presents an abundant series of equatoria or volvelle, instruments composed of stacked revolving paper disks. With the aid of strings, they served to compute and predict the positions of the planets. In 1541, the Astronomicum earned Apianus his appointment as imperial mathematician; in that capacity, he often met with Charles V to give him astrological advice.