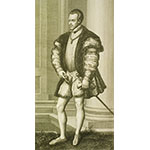 Eldest son of Emperor Charles V (1500-1558) and a staunch defender of Catholic orthodoxy, Philip II became King of Spain in 1556, making the country the hub of his absolutist policy. Waged war with France, defeating it at the battle of Saint-Quentin (1557); with Portugal, which he occupied in 1580, becoming its king; and with England, which, however, inflicted a crushing defeat on the Spanish Armada in 1588. To celebrate his victory over the French, built the Escorial Palace between 1563 and 1584.