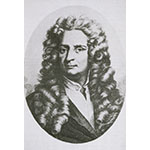 Born in Freshwater, on the Isle of Wight, Robert Hooke was one of the most brilliant and versatile English scientists of the seventeenth century. He attended Oxford University but never graduated. There, he was in contact with some of the "natural philosophers" who later formed the nucleus of the Royal Society: John Wilkins (1614-1672), John Wallis (1616-1703), Christopher Wren (1632-1723), and Robert Boyle (1627-1691). Hooke was an extremely talented inventor and instrument-maker, giving his name to a version of the microscope. He also formulated a wave-theory of light, which he described in detail in his Micrographia (1665). Curator of Experiments at the Royal Society for about fifteen years (1662-1677), he served as the Society's Secretary from 1677 to 1682. In the field of pneumatics, Hooke's name is linked, in particular, to the construction of an improved version of Otto von Guericke's air pump. Boyle, whom Hooke assisted between 1657 and 1662, later described the device in the New Experiments Physico-Mechanical (1660). Through an ingenious series of experiments conducted with the instrument, Boyle and Hooke demonstrated that the observable effects in Torricelli's experiment were actually due to air pressure, that sound was impossible in a vacuum, and that air was permanently elastic.