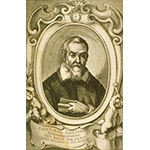 After obtaining his medical degree from the University of Padua in 1582, Santorio practiced for many years in Croatia. In 1599, he returned to Venice ,where he made friends with Paolo Sarpi (1552-1623), Giovanfrancesco Sagredo (1571-1620), and Galileo (1564-1642). His adaptation of the pendulum to medical practice was probably inspired by discussions with Galileo on the latter's experiments with pendulums in 1602. Santorio described the medical use of the pendulum in a book, Methodi vitandorum errorum [...] in arte medica [Methods to avoid errors in medical practice], published in late 1602 or early 1603. He was a pioneer in the use of physical measurements in medicine; his most famous apparatus was a large balance to study metabolic transformations. Among those who volunteered for the experiments was Galileo. In 1611, Santorio was named professor of medical theory at the University of Padua. There, he published descriptions of thermometric apparatus that had probably been inspired by Galileo's thermoscope.