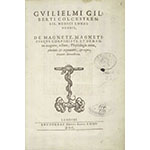 Gilbert, who completed his medical studies in 1569, became a highly regarded practitioner and was chosen by Elizabeth I (1533-1603) as her personal physician. His masterpiece, De Magnete (London, 1600), was dedicated to the analysis of the properties and nature of magnets and to electrical phenomena. Galileo (1564-1642) stated that he obtained a copy from a philosopher who feared that keeping it on the shelf would infest the other books with the novelties it contained. In the first decade of the seventeenth century, many of the letters that Galileo exchanged with Fra' Paolo Sarpi (1552-1623) and with Giovanfrancesco Sagredo (1571-1620) testify to the considerable interest aroused by Gilbert's book. Galileo repeatedly emphasized its peculiar combination of new ideas - based on observations and experiments - and inadmissible manifestations of credulity. Gilbert observed magnetic influence as well as magnetic inclination and variation. He compared the Earth to a great magnet and studied the field produced by a small spherical magnet.