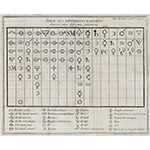 Affinity tables enjoyed considerable success in the eighteenth century, particularly in France and Germany. They were simply tables showing the order in which a substance, or chemical principle, replaced another substance in a reaction. Despite their limited predictive power, they remained popular, partly because they brought order to the growing number of known substances and reactions, but mostly because they sought to fulfill the dream of revealing the general laws of chemistry.