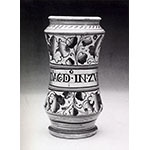 The albarello (or alberello) is the oldest type of pharmacy jar, designed to contain dense, viscous substances. Most albarelli were cylinder-shaped with a wide opening. They were often tapered at the center for easier handling. In the earliest models, the lids consisted of parchment sheets, but later versions had ceramic lids, sometimes fitted with a knob and handles. The Near Eastern style raises the possibility that the albarello reached the West via the Arab invasion of the Mediterranean. But some experts see the albarello as an imitation of the bamboo packaging in which medicinal drugs were shipped from the Orient.