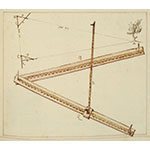 The archimetro was in very widespread use in Florence in the second half of the sixteenth century. It consists of a folding square with two graduated arms, a magnetic compass in the swivel joint, and a cross-arm sliding on the first two. The three articulated arms can be positioned into a triangle similar to the one formed by the lines of sight toward two distant points. The cross-arm will thus be proportional to the distance between the two points, while the other two arms will be proportional to the distances of the points from the observer. From a single one of the three linear values, we can deduce the other two using the graduated scale. Thanks to the compass, the archimetro is also an effective surveying instrument whose readings can be instantly reproduced in the form of drawings.