Astronomical observatories mentioned in the descriptions of instruments in the Museo Galileo of Florence. 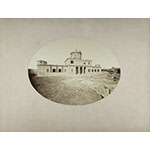 In 1790, Tommaso Perelli (1704-1783) suggested the construction of an observatory on the hill of Arcetri. The project was taken up by the astronomer Giovanni Battista Donati (1826-1873). The proposal was presented to the Government in 1864 and the Observatory was opened in 1872. However, the construction was so shoddy that the facility had to be rebuilt in 1893. After renovation, the Observatory resumed full operations with Antonio Abetti (1846-1928) at its head. Under Giorgio Abetti (1882-1982), who succeeded his father in 1921, the Observatory became a modern research institute. A 25-meter solar tower built in 1924 and a wide, state-of-the-art array of scientific instruments enabled Abetti to engage in productive research on solar physics and stellar spectroscopy. In 1953, Guglielmo Righini (1908-1978) was appointed director. He further expanded the Observatory's resources, inaugurating the study of solar radio astronomy in Italy. 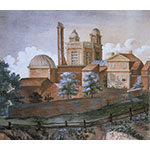 Astronomical observatory near London, founded in 1675 by King Charles II of England. The initial facility was a building whose top floor consisted of an octagonal room housing the astronomical instruments. After the Greenwich meridian was chosen as the reference meridian in 1884, other buildings were erected to accommodate new instruments. Since the observatory's transfer to Sussex in 1946, the old buildings—which had hosted such distinguished astronomers as Edmond Halley (1656-1742)—have been home to the astronomical section of the National Maritime Museum. 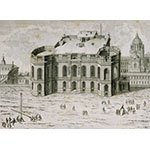 The Paris Observatory is the oldest astronomical observatory still in operation. Opened in 1667, in the reign of Louis XIV (1638-1715), it was initially placed under the control of the Académie Royale des Sciences. The building, designed by Claude Perrault (1613-1688), was finished in 1672. The first director was Giovanni Domenico (Jean-Dominique) Cassini (Cassini I, 1625-1712), succeeded by his son Jacques (Cassini II, 1677-1756), his nephew César-François (Cassini III, 1714-1784), and his grand-nephew Jean-Dominique (Cassini IV, 1748-1845). After the Cassini dynasty, other renowned directors followed, including Joseph-Jerôme de Lalande (1732-1807), Jean-Baptiste Delambre (1749-1822), Jean-François-Dominique Arago (1786-1853), and Urbain Le Verrier (1811-1877). The Observatory was the site of major scientific achievements: Giovanni Domenico Cassini produced an extraordinary map of the Moon—the best before the invention of photography—and discovered the division of Saturn's rings; in 1675, the Danish astronomer Ole Römer (1644-1710) calculated the velocity of light for the first time; in 1845, Hippolyte Fizeau (1819-1896) and Léon Foucault (1819-1868) obtained the first daguerreotype of the Sun; in 1850-1851, in the Grande Salle [Great Hall], Foucault performed his famous pendulum experiment, demonstrating for the first time the physical effects of the Earth's rotation; Le Verrier studied the perturbations of Uranus, which led to the discovery of Neptune in 1846. 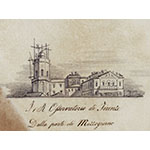 The tower of the Observatory (Specola) was built between 1780 and 1789 at the behest of Grand Duke Peter Leopold of Tuscany (1747-1792). Attached to the Museo di Fisica e Storia Naturale of Florence, the facility was soon equipped with various instruments, most of them purchased abroad by the Museum's first director, the abbot Felice Fontana (1730-1805). However, the location was unsuitable for effective observations. The first astronomer to be named director was Domenico De Vecchi (1768-1852), in 1807. After a further phase of inactivity, the title of Museum Astronomer passed to Jean-Louis Pons (1761-1831) in 1825, succeeded by Giovanni Battista Amici (1786-1863) in 1831. Giovanni Battista Donati (1826-1873), appointed in 1859, oversaw the Observatory's transfer to the hill of Arcetri. 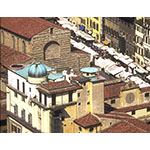 In 1756, the Jesuit Leonardo Ximenes (1716-1786) established a small astronomical observatory on the upper grounds of the convent of San Giovannino. Following the suppression of the Jesuit Order, the facility was turned over to the Scolopian Fathers in 1775. At Ximenes's death, in accordance with his will, two teaching posts were established, one in astronomy and one in hydraulics. Both were filled until the mid-nineteenth century. Meteorological observations began in 1813, alongside traditional studies in astronomy, hydraulics, and engineering. Particular attention was also paid to mathematics, surveying, and cartography: in 1830, Giovanni Inghirami (1779-1851) produced the first "Geometrical Map of Tuscany" to modern mapmaking standards. The Observatory ceased its astronomical work in the mid-nineteenth century. However, thanks to Filippo Cecchi (1822-1887) and, later, Guido Alfani (1876-1940), it became involved in seismology, which was emerging in those decades as a full-fledged science. The Observatory possesses important scientific collections, two libraries and an archive. It still conducts programs in meteorology and seismology.