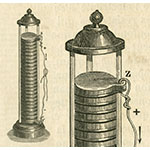 In 1791, Luigi Galvani (1737-1798) observed that a frog's leg muscle contracts when connected to the crural nerve by means of a bimetal arc; in so doing, Galvani claimed to have discovered animal electricity. Alessandro Volta (1745-1827) demonstrated that the source of the electricity was not the frog but the arc used by Galvani. For greater effect, Volta built a battery, an array of alternating zinc and copper disks with a cardboard disk soaked in briny water placed between each couple. The arrangement of the disks in a vertical column gave rise to the term pile. The invention was announced in 1800. Volta's electrochemical battery was continuously improved and altered in the nineteenth century, which also saw the development of storage batteries (rechargeable batteries) and thermoelectric batteries. In over two centuries, thousands of different batteries have been developed in the ongoing attempt to obtain a lasting, constant, and compact source of continuous current.