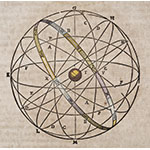 When we look at the sky on a clear night, the celestial bodies appear as points of light on an immense spherical vault centered on the observer: the celestial sphere. There we can observe the two types of bodies: the fixed stars, whose relative positions do not change; and the moving stars—such as the planets—which, instead, move with respect to the fixed stars. During the night, the celestial sphere seems to revolve on the terrestrial axis; this is an apparent motion, due to the rotation of the Earth. So the stars rise and set, as the does Sun during the day. The celestial sphere is, for the observer, the surface on which the stars seem to lie and move. To identify their positions and follow their motions, a system of spherical coordinates is used, resembling a projection in space of the network of terrestrial meridians and parallels.