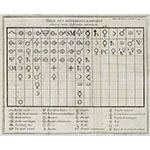 Relationship between substances that determines their combination, often linked in theoretical terms to the essential nature of matter. Isaac Newton (1642-1727) attributed the phenomenon of chemical combination to short-range attractive forces between particles, analogous to the force of gravity. However, the term affinity eventually came to mean the simple "tendency to combine," since chemists avoided speculating on the causes of the phenomenon. In the early eighteenth century, it was assumed that these relationships could be diagrammed in tables (accordingly named "affinity tables") and that combinations and splits could therefore be predicted.