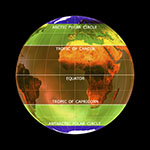 The obliquity of the Earth's axis to the plane of its orbit—today equal to 23°27'—causes sunrises and sunsets to follow very different paces during the year depending on the observer's geographic latitude. These paces characterize the broad climatic trends in areas of the globe lying between specific parallels: the arctic and antarctic polar circles, respectively at latitudes 66°23' (= 90° - 23°27') North and South, and the Tropics of Cancer and Capricorn, respectively at latitudes 23°27' North and South. 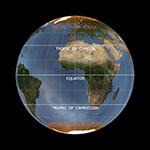 For example, at the arctic polar cap, near the summer solstice, the Sun does not set when reaches its highest altitude. Vice versa, near the winter solstice, the Sun does not rise when it reaches its lowest altitude. The phenomena intensify approaching the terrestrial north pole, where the Sun stays above the horizon for the six months between the spring equinox and the autumn equinox, while in the following six months it gives way to the arctic night.

Because of the scarcity of total annual sunlight, the polar caps are extremely cold and largely covered by permanent ice. 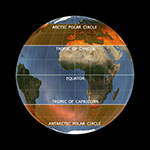 The belt of the globe lying between the arctic polar circle and the Tropic of Cancer is called the northern temperate zone; the belt lying between the antarctic polar circle and the Tropic of Capricorn is called the southern temperate zone. At these middle latitudes the Sun is fairly high on the horizon. Day and night are almost always of uneven length, but their differences vary in a regular pattern.

Because of the shifting length of day, temperate zones experience different seasons during the year, but they are hardly ever frigid or torrid. 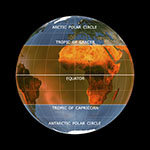 The equatorial belt lies between the Tropics of Cancer and Capricorn and is bisected by the terrestrial equator. On the belt, the Sun always moves very high above the horizon, and twice a year reaches the zenith, i.e., the point directly over the observer. The differences in length between day and night are minimal, and disappear altogether at the equator. As a result, the equatorial zone is continuously subjected to high—and often torrid—temperatures.