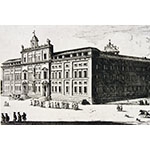 Religious order of regular clerics founded in 1540 by Saint Ignatius of Loyola (1491-1556) for the defense of orthodoxy and the worldwide dissemination of the Catholic religion through the opening of chapters even in countries distant from Europe, such as China and the Spanish and Portuguese colonies of Latin America. One of the Company's strategic objectives was to establish schools whose reputation would attract the sons of prominent families. Many members of the Company were deeply versed in the humanities and the sciences. In the late sixteenth century, the Jesuits became leading figures in the philosophical-scientific debate. The Jesuit Fathers achieved distinction in observational astronomy and experimental physics. They usually defended traditional positions and the primacy of Aristotle's (384-322 B.C.E.) natural philosophy, which, however, they substantially updated and corrected. The Order was abolished in 1773 by Clement XIV (1705-1774, Pope from 1769) with the bull Dominus ac Redemptor, and restored in 1814 by Pius VII (1742-1823, Pope from 1800).