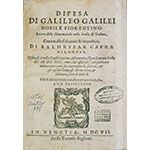 Galileo (1564-1642) had the Defense of Galileo Galilei [...] against the calumnies and pretences of Baldessar Capra printed in Venice in 1607. Baldassarre Capra (c. 1580-1626) had challenged Galileo's views on the new star that appeared in the constellation of Sagittarius in 1604; later, he had claimed priority for the invention of the geometric and military compass described by Galileo in Le operazioni del compasso geometrico et militare (Padua, 1606).