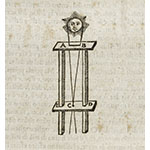 The term diopter (Greek dioptra, from diá = through and opteuo = I observe) denotes any instrument fitted with one or more perforated sights through which observations can be performed.

Before the dissemination of Islamic astronomy in late medieval Europe provided a specific term, diopter also designated the alidade, i.e., the small revolving rod (Arabic al-'idada) pivoting on the center of the goniometric scale engraved on the front or back of many ancient astronomical and surveying instruments. Two pinnules, called sights or pointers, are attached at right angles to the alidade. They are fitted with holes for aiming at a selected object. An index—often consisting of the edge of the alidade itself—shows on the goniometric scale the angle between the line of sight to the targeted object and a predetermined direction. With astrolabes, for example, the preset direction is the vertical of the observation locality. 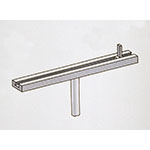 In his Mathematical Syntax, or Almagest, Claudius Ptolemy (2nd C. C.E.) credits Hipparchus of Nicaea (2nd C. B.C.E.) with the invention of an instrument, called diopter, for measuring the apparent diameters of the Sun and Moon. Pappus of Alexandria (4th C. C.E.), in his Comment on the fifth book of the Almagest, describes the diopter as a grooved guide four cubits (c. two meters) long, fitted with two rectangular pinnules. The first, fastened to one end of the guide, carries an observation pinhole; the second, which slides along the groove, has no pinholes. When the instrument has been aimed, the sliding pinnule is moved back and forth until it covers the disk of the Sun or Moon exactly. From the ratio of the diameter of the sliding pinnule to its distance from the fixed pinnule, one can determine the angle subtended by the celestial body.

Despite Ptolemy's account and some minor structural differences, the instrument was already known to Archimedes of Syracuse (287-212 B.C.E), who, in the Arenarius [Sand-reckoner], states that he used it to measure the Sun's apparent diameter. 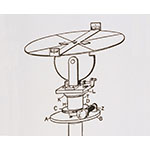 A disk and pivot are fixed coaxially to a pillar stand. The pivot carries a cylinder with a cogwheel attached to its base. A screw with a thread intersected by a longitudinal cavity blocks the cogwheel from the disk if it meshes with the cogwheel, or lets the cogwheel rotate freely if the cavity is facing it. Two accessories were placed over the cylinder in alternation:

1 - a sighting device. An alidade rotates at the center of the top side of a circular metal plate, whose rim is divided into 360°. On a diameter of the lower side of the plate, a half-cogwheel is fastened at a 90° angle. A second grooved screw, attached to the rotating cylinder, blocks the tilt of the half-wheel if the two parts mesh, or enables it to tilt on the horizon if the cavity is facing it. To perform an observation, the user freed the screws. After removing the alidade, the user would turn the graduated plate until it became complanar with the two distant objects whose angular separation was to be measured. The plate's position was then blocked with the two screws, the alidade was reinserted, and the two objects were aimed at in succession. The final step was to compute the difference between the degrees read for each object.

2 - a water level. A U-shaped bronze tube, housed in a wooden rule and filled with water, was terminated at either end by a small upright glass pipe. Two pinnules, whose height could be adjusted with screws, were placed behind each pipe. By aligning the slits in the pinnules with the water surface in the pipes, one obtained a horizontal line of sight with which to aim at distant objects lying at the same level as the observer.

Because of some similarities, Hero's diopter is usually recognized as the ancestor of the modern theodolite.