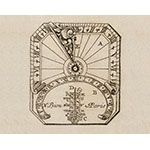 The day is divided into 24 hours of 60 minutes referred to as "true," "mean" or "local," depending on whether they are defined by the true day (which varies continuously), the mean day (of constant duration throughout the year), or the interval between mean local midnight and the Sun's culmination on the local meridian. Local hours are shown by sundials and nocturnal clocks, which depend on the timing of astral phenomena; by contrast, on mechanical clocks, the hours denote a conventional division of time.