Like the altazimuth coordinates and equatorial coordinates, the ecliptic coordinates are an orthogonal spherical reference system, i.e., in which the two series of circles selected to fix the position of a point on the celestial sphere intersect at right angles.

Since the system is based on celestial references, the ecliptic coordinates are, in a first approximation, linked to the fixed stars. This means that the two angles used to identify a celestial body— (ecliptic) longitude and (ecliptic) latitude—are identical for all terrestrial observers.

Of the three systems, ecliptic coordinates are those in longest documented use, owing to their convenience. As Claudius Ptolemy (2nd C. C.E.) notes in the Almagest, the precession of the equinoxes causes the celestial sphere to revolve very slowly around the ecliptic poles. For this reason, the ecliptic coordinates of a celestial body measured even very long ago can be easily updated by leaving the latitude unchanged and increasing the longitude by a quantity equal to the accumulated precession. Neither of the other two systems allows such a simple adjustment. 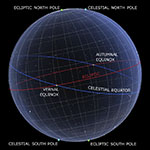 "Ecliptic" simply means "(oblique) circle" (in Greek ekklitiké, from klinein = to bend), which explains why the ecliptic coordinates were known in antiquity as the "system of the oblique sphere." Someone, however, has speculated that the term derives from eclipses (Greek ekleiptikós = pertaining to eclipses), given that these phenomena can occur only when the Moon, whose path is inclined by about 5° to the ecliptic, crosses the latter in a point corresponding to the position of the Sun (conjunction) or in a diametrically opposite point (opposition). 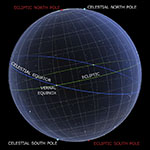 The main axis of reference used in ecliptic coordinates is the straight line passing through the observer and perpendicular to the plane of the ecliptic. It intersects the celestial sphere in two points: the north ecliptic pole and the south ecliptic pole. 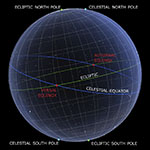 The equinoxes are the two diametrically opposite points in which the ecliptic intersects the great circle of the celestial equator. Their name (from the Latin equam noctem = equal night) indicates that, when the Sun is at the equinox, day and night are of equal length. This happens on March 21, when the Sun, moving from the southern hemisphere of the celestial sphere to the northern hemisphere, appears in the vernal equinox (from the Latin vernum = pertaining to spring), and on September 22 or 23, when the Sun, returning to the southern hemisphere, appears in the autumnal equinox.

The vernal equinox is also called the vernal point and today, in astronomical jargon, the gamma point. If the ecliptic is divided into twelve zodiac signs of 30° each, the vernal equinox traditionally falls at the beginning of Aries (the Ram), whose astrological symbol resembles the Greek letter gamma (g). 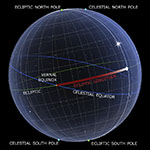 The first of the two ecliptic coordinates is called (ecliptic) longitude. It is the angle, ranging between 0° and 360°, computed from west to east from the vernal equinox to the intersection between the ecliptic meridian of the celestial body and the ecliptic.

It should be noted that from antiquity to the modern age the ecliptic was customarily divided, starting from the vernal equinox, into twelve parts of 30° corresponding to the individual zodiac signs: Aries, Taurus, Gemini, Cancer, Leo, etc. For example, a longitude of 75° (= 30° + 30° + 15°) was referred to as 15° in Gemini, a longitude of 117° (= 30° + 30° + 30° + 27°) as 27° in Cancer, and so on. Although it ignores the progressive divergence between the sectors of the ecliptic and the zodiac constellations due to the precession of the equinoxes, this division is still used by astrologers today. 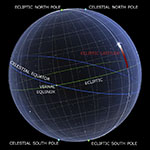