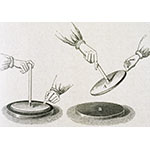 Invented by Alessandro Volta (1745-1827) in 1775, the electrophorus is the precursor of induction electrical machines. It consists of an insulated plate called a "cake," typically made of resin, on which is placed a metal disk with an insulated handle. The rubbed resin acquires negative electricity; when the cake touches the metal disk, the latter is charged, by induction, with positive electricity on the bottom side and negative electricity on the top side. If the top side is made to touch the ground, it disperses the negative charges in the ground, and the metal disk will remain charged only with positive electricity. Raising the disk and bringing it close to a grounded conductor produces a spark. The operation can be repeated almost indefinitely, as the cake retains its charge for very long periods of time.