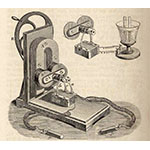 The spread of electrotherapy (or electrical medicine, as it was then known) was linked to the success of the spectacular electrical experiments of the mid-eighteenth century, as well as to the invention of the Leyden jar. The amusing experiments involving the human body revealed the physiological effects of electrification. In particular, the shocks produced by the Leyden jar showed the ability of discharges to stimulate involuntary muscle movements. The treatment of paralysis thus became one of the fields in which electrification was most commonly applied. However, electrical medicine was viewed as a sort of panacea that could treat a wide range of disorders. Despite the controversies and the prevailing skepticism of the medical profession, the therapeutic applications of electricity remained fashionable, particularly for self-administered cures. In the nineteenth century, the invention of the battery and the later discovery of induced currents and high-frequency currents spawned new devices and therapies that became highly popular. Such machines were still in use in the early decades of the twentieth century.