Like altazimuth coordinates ecliptic coordinates, equatorial coordinates are an orthogonal spherical reference system, i.e., in which the two series of circles selected to fix the position of a point on the celestial sphere intersect at right angles.

Like ecliptic coordinates, equatorial coordinates are based on celestial references and are thus, in a first approximation, linked to the fixed stars. This means that the two angles used to identify a celestial body—right ascension and declination—are identical for all terrestrial observers. 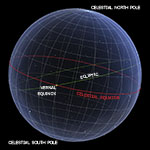 The main great circle of reference of the equatorial coordinates is the celestial equator, which gives them their name. It is also called equinoctial circle, or more concisely equinoctial, because it carries the two diametrically opposite points of the equinoxes. 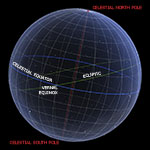 The main axis of reference used in equatorial coordinates is the straight line passing through the observer and perpendicular to the plane of the celestial equator. It is called polar axis or axis of the heavens because it intersects the celestial sphere in two points: the celestial north pole and the celestial south pole.

In the modern heliocentric system, the polar axis is merely an imaginary straight line parallel to the axis of the Earth's rotation. But in geocentric astronomy, it was an objective reality. The celestial poles were the immobile pivots of the sky, around which the crystal spheres of the planets and the fixed stars completed a full revolution in about 24 hours. 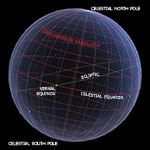 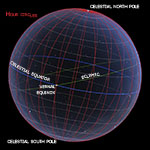 Each great circle intersecting the celestial poles is called an hour circle. The set of hour circles constitute the meridians of the celestial sphere in the equatorial-coordinates reference system.

They owe their name to a practical mathematical relationship. Since the celestial sphere and the stars seem to uniformly complete a revolution from east to west in about 24 hours, the angle of separation between two hour circles, measured on the celestial equator and ranging between 0° and 360°, can be linked to a "stellar" or "sidereal" time ranging between 0 and 24 hours. By measuring the angle between two hour circles, we can therefore determine the sidereal time that will elapse before the rotation of the celestial sphere takes the more eastward hourly circle to the position initially occupied by the more westward hour circle. 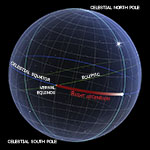 Until the seventeenth century, right ascension was usually measured in degrees (from 0° to 360°) and fractions of degrees. Later, a measurement in hours, minutes, and seconds became the standard practice. In fact, it should be remembered that, while the celestial sphere appears to complete its revolutions around the celestial poles in uniform periods of about 24 hours, it will rotate by about 1° every four minutes. The difference in right ascension between two celestial bodies therefore defines either (1) the angular distance between the two celestial bodies relative to the celestial equator, or (2) the sidereal time elapsed between the crossings of the local meridian by the first and second celestial bodies. 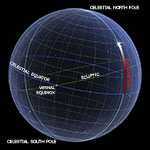 Astronomical declination must not be confused with magnetic declination, which, for the compass, denotes the angle—varying from place to place—between the direction of the magnetic pole and that of the geographic pole.