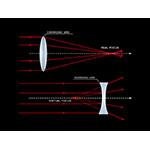 If a beam of parallel rays of light strikes a lens and passes through it, the emerging rays are no longer parallel. There are two possibilities:

1) After passing through the lens, the rays are directed toward one point (they converge, or are focused). The point of convergence is called the focus or focal point, where the light is most concentrated. This concentrated light can actually be observed, for example by placing a sheet of paper on the path of the rays: for this reason, the focus is called real. Beyond the focus, the rays diverge. A lens of this type is known as converging.

2) After passing through the lens, the rays diverge as if they came from the same point in front of the lens (located by extending the rays backwards). This point is also called the focus, but does not exist as an actual concentration of light and is not visible on a sheet of paper: it is therefore called virtual. A lens of this type is known as diverging.