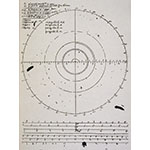 Finding the position of a point on the Earth requires two coordinates: latitude and longitude. To determine the longitude, local time must be compared with the time on a given meridian. In the sixteenth and seventeenth centuries, various attempts were made to develop systems for performing this time measurement with absolute precision, so as to determine a ship's exact position at sea. This was a vital requirement in a period when ocean navigation became increasingly important. The method developed by Galileo (1564-1642) consisted in using the four moons of Jupiter as an accurate natural clock. For this purpose, he endeavored to compute the moons' periods and eclipses with precision. His method was based on the telescopic observation of the positions of Jupiter's moons and on the use of the Jovilabe and the clock. The Spanish monarchy and, later, the States General of the United Provinces of Holland expressed great interest. Galileo conducted lengthy negotiations with the representatives of the States General with a view to selling his method, which could have dramatically facilitated orientation at sea. The States General offered him a gold crown that Urban VIII (1568-1644, Pope from 1623) expressly forbade him to accept.