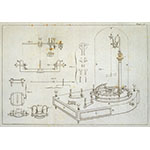 Laboratory instrument used to measure weak electric currents (on the order of fractions of amperes). In the nineteenth century, countless models of galvanometers were invented using the interaction between magnets and currents. In many galvanometers, for example, a magnetic needle was deviated by the magnetic field of a coil in which flowed the current to be measured. More intense electric currents—such as those used for technical and industrial purposes—were measured by means of the amperemeter.