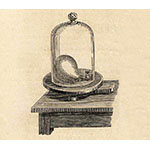 The term gas was coined by the Belgian physician Jean-Baptiste van Helmont (1579-1644) to designate aerial spirits. For van Helmont, gas had a cosmological significance: every individual was endowed by God with a specific life plan, and gas was the vector, the spiritual carrier of the specific vital plan of every object. The term gas was not very popular in the seventeenth century; the concept of gas as a third class of substances was not introduced until the eighteenth century. Reverend Stephen Hales (1677-1761) was the first to demonstrate, in 1727, that air played a decisive role in chemical processes, although he did not identify any specific type of gas. Previously, air had not been regarded as a chemical substance capable of combining with solids and liquids. Many "airs" were rapidly discovered in the following decades.