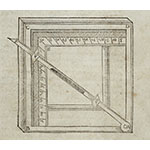 Instrument derived from the back of the astrolabe, of which it reproduces only the shadow square. Comprises a square frame bearing the shadow scales on two adjacent sides. The four sides of the frame are usually divided into twelve parts of five minutes each. The front vertical side represents the umbra versa (shadow cast by a horizontal gnomon represented by the upper side), while the lower side represents the umbra recta (shadow cast by a vertical gnomon represented by the rear side). At the angle opposite the one formed by the two shadows is hinged an alidade with sights that simulates the inclination of the Sun's ray, proxied by the observer's line of vision. The instrument serves to measure distances, heights, and depths, using the principle of the proportionality of similar triangles.